While I wait for a buttload of ballpark pictures to upload from tonight's Mets-Bisons wake downtown, I'll catch up on my other business of the day and complete a review of the third installment of Susan Jane Bigelow's series about futuristic, dystopic, but generally wonderific characters for whom she's coined the term "Extrahumans." 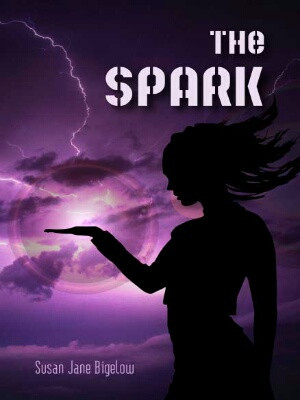 Full disclosure #1: I was very involved with the editing of the first two books in this series, Broken and (especially) last year's Fly into Fire.  This one, though, I came upon only as a loyal reader- and, having finished my advanced e-copy earlier this week, couldn't find a single editorial thing to complain about. Dammit.

Full disclosure #2: You should go out and get this book. Today, if possible. (Yesterday would be better, if it was possible, but it wasn't, unless you were a Kickstarter supporter, since it just released today.)

I suppose you want reasons other than my loyalty to friends. Here are a few I can think of right off, by contrasting some things that The Spark (in the tradition of its predecessors) is NOT:

It is not a thrill-a-minute showcase of superhuman powers, or a bunch of heroes saving the world from an impossibly evil threat and then going out for Shawarma. That was mighty fun, but sorry, The Avengers got there first and we didn't need another spin on it, and so Susan, wisely, didn't give us one.  So many of the characters in that film, and in its recent Marvel-ous cousins, and in most works featuring super-powered individuals, go down the same big-budget road of defining their characters in terms of what they can do rather than in terms of who they are. Susan's Extrahumans do not make that mistake. (They make other mistakes, but they're part of the plot and are as well thought-out as their overall arcs.)  Each of the three to date has focused on a character from the 'verse of amped-up mutants (but she never calls them that): Broken on a flyer-healer, Fly into Fire, mostly, on the anointed leader of the band but with a new-to-that-book character becoming more and more important as the story goes on.  It is that young woman, named Dee, who provides the Spark for this third story, and while you will see her strut her stuff in significant detail, you also feel what she feels- before, during and after those money-shot movie moments. They do not overwhelm the story; if anything, they are secondary to the just as powerful descriptions of what leads up to, and follows, those moments.

It is also not reserved for those who have read the previous two books. This is a particular peeve of mine, as both reader and editor. A sequel should provide extra levels of understanding and appreciation for the regular readers of the series, but the later works' references to the prior books should either be explained or inferrable from context. (Semi-spoilery example: the n00b Spark reader will be able to intuit that a place called Calvasna is Bad Bad Very Bad.  It takes the backstory for you to really appreciate, and palpably feel, just how bad, when Dee and other characters are remembering it.)

Finally, it does not leave you on a precipice pointing directly at the inevitable sequel of itself. The Spark ended more gently, and open-endedly, than any of its predecessors. Will there be a fourth? Damned if I know. What direction would it go in? Likewise. But just as real police don't solve crimes in 44 minute intervals week after week, real superheroes sometimes get only as far as their powers, and emotions, and fake identity cards, can take them. This story ended in a sweet and comfortable place, and I can see any number of directions that its characters may, or may not, go from that end.

This entry was originally posted at http://captainsblog.dreamwidth.org/70166.html. Please comment here, or there using OpenID.
Collapse